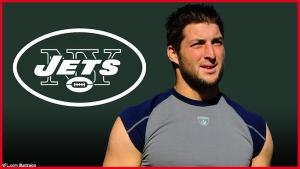 THE Prophet Jonah was sent to Nineveh. St. Paul was sent to Athens, Macedonia, Rome. And now Tim Tebow has been sent to New York City.

There was a moment last week when it looked as if the trade shipping Tebow from the Denver Broncos to the New York Jets might somehow fall through — that Tebow might end up a Jacksonville Jaguar instead, with a guaranteed starting job, a heavily evangelical fan base, and none of the insanity involved in eclipsing Jeremy Lin as the most famous Christian athlete in Babylon-upon-the-Hudson.

O ye of little faith. Did you think that the Lord God of Hosts, having raised Tebow up as a Gideon of the gridiron, would pass up the opportunity to put his faithful servant to the test? Did you think that the angelic screenwriters responsible for scripting last year’s succession of Tebow-related improbabilities had nodded off after the Broncos were dispatched in the A.F.C. playoffs? Did you think that the archons and demiurges who preside over America’s culture war would be content to let Tebow fade into obscurity — some red-state-friendly endorsement deals, a few 6-10 finishes, and then early retirement and a lifetime of under-the-radar charity work?

Above all, did you think that Tebow himself, with his distinctive mix of missionary zeal and “give me the ball” confidence, would duck the Gotham opportunity? That he would pull a LeBron James and take his talents down to Florida instead?

No, this was where the Tebow story was always destined to end up. Denver was his Galilee; New York will be the Roman Colosseum. Or to be pop cultural rather than scriptural: Denver was District 12 in Suzanne Collins’s Panem, and the Meadowlands will be the Hunger Games arena.

New Yorkers are a sophisticated lot, and the Tebow hype will afford them plenty of opportunities for eye-rolling. The sophisticated football fan will tell you that Tebow is a bad-to-mediocre quarterback with a few unusual skills who rode a lucky streak to undeserved fame; the rest is just the standard media fantasy about “intangibles” and “grit” dressed up with spirituality. . . .

But let’s be unsophisticated for a moment. Why is Tim Tebow such a fascinating and polarizing figure? Not just because he claims to be religious; that claim is commonplace among football stars and ordinary Americans alike. Rather, it’s because his conduct — kind, charitable, chaste, guileless — seems to actually vindicate his claim to be in possession of a life-altering truth.

Nothing discredits religion quite like the gap that often yawns between what believers profess and how they live. With Tebow, that gap seems so narrow as to be invisible. (“There’s not an ounce of artifice or phoniness or Hollywood in this kid Tebow,” ESPN’s Rick Reilly wrote last year of the quarterback’s charitable works, “and I’ve looked everywhere for it.”) He fascinates, in part, because he behaves — at least in public, and at least for now — the way one would expect more Christians to behave if their faith were really true. . . .

So even the most pious of Jets fans shouldn’t expect a Super Bowl title. But if their new quarterback’s story really has an Author, they’re in for a pretty interesting ride.