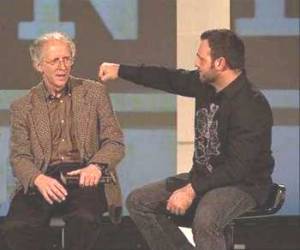 First, no regret. John Piper has no regret for befriending Mark Driscoll, going to Mark Driscoll’s church and speaking at his events, or having him come to the Desiring God conference. I do not regret that. My regret is that I was not a more effective friend. Mark knew he had flaws. He knows he has flaws. And I knew he had flaws. He knew that I knew he had flaws. There were flaws of leadership attitude, flaws of unsavory language that I think is just wrong for Christians to use, flaws of exegetical errors, say, in regard to the Song of Solomon. I wrote a long critique of his use of the Song of Solomon. I wrote him personally about these. But I always hoped that in those cases the relationship with me and with others would be redemptive and helpful. . . .

With regard to his books, whether they should sit in shelves in bookstores or churches or homes, that is a tough call. . . . I can see a temporary reaction to Mark stepping down by bookstores or churches where they pull those back so as not to give any kind of public affirmation of mistakes that Mark may have made, but then maybe in years to come the books will emerge as helpful since I think most of what he has written has been true and helpful. . . .

Third. This also follows from those two. Sometimes and I have experienced this. Sometimes you can see what others are saying, pointing out to you about yourself and sometimes you can’t. And if you can see it, then you repent and you fight the sin. But what if you can’t even after others tell you what they see you look and you don’t see it in the way they see it. What then? Well, in order to have any integrity, I think you have to go with what you see. Otherwise you would be always jerked around by everybody on the street that tells you they see something and you say: Well, I don’t think it is there. And Paul certainly did not agree with all the criticism that came against him, nor Jesus. When they said he had a demon, he didn’t have a demon. So they were wrong. His critics were wrong. . . .

Seventh lesson. God’s kingdom and his saving purposes in the world are never dependent on one man or one church or one denomination. God is God and his kingdom is coming and no one can stop it and his Word is not bound. . . .

And the last lesson I thought of was, let him who thinks that he stand take heed lest he fall. Restore such a one in the spirit of meekness lest you, too, be tempted. Paul said. I think it would be sinful and unbiblical for any of Mark’s detractors to simply feel good riddance. That is a sin to feel that. No, we pray for truth to hold sway and for grace to transform and renew and restore all of us including Mark. . . .

You can listen to and read John Piper’s entire response here: