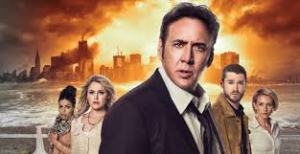 On Friday night, Dianne and I headed for the theatre to see Nicholas Cage and Left Behind.  It was not the best movie we’d ever seen.  Here are a few impressions:

1. It was hard to watch.  I left wondering how Nicholas Cage agreed to be a part of a production that so lacked in professional excellence.  A number of times during the movie, I felt embarrassed for the director and the cast.  But what do I know about cinematography?

2. It taught a misguided eschatology.  I don’t believe the Scriptures teach a secret rapture, leaving behind people dumbfounded and wondering what in the world happened.  Jesus’ return will not be a stealth and silent secret.  It will be very public!  Everyone will know exactly what has happened!

“For the Lord Himself will descend from heaven with a shout, with the voice of the archangel, and with the trumpet of God; and the dead in Christ shall rise first.  Then, we who are alive and remain shall be caught up together with them in the clouds to meet the Lord in the air, and thus we shall always be with the Lord” (1 Thessalonians 5:16-17).  “For just as the lightning comes from the east, and flashes even to the west, so shall the coming of the Son of Man be” (Matthew 24:27).  “Behold, He is coming with he clouds, and every eye will see Him, even those who pierced Him; and all the tribes of the earth will mourn over Him” (Revelation 1:7).

3. It gave the false impression that there will be a second chance.  Once Jesus returns, it’s over for eternity.  There won’t be any second chances then for people to get serious and get right with God.  That’s what today is for.  We’re deceiving people if we give them the impression that there will be plenty of time after Jesus’ return to come to our senses — just like Nicholas Cage did!

In Revelation 6, we’re told that Christ’s return will bring immediate despair to those who wasted the years of their lives loving their sin instead of the Savior.  “The sky was split apart like a scroll . . . and the kings of the earth and the great men and the commanders and the rich and the strong and every slave and free man, hid themselves in the caves and among the rocks of the mountains; and they said to the mountains and to the rocks, ‘Fall on us and hide us from the presence of Him who sits on the throne, and from the wrath of the Lamb; for the great day of their wrath has come; and who is able to stand” (Revelation 6:14-17).

4. It misled viewers about the spiritual condition of children.  In the movie, all children are “raptured up” and are taken home to be with Jesus.  Not only were all of the hospital nursery cribs emptied out, but even Lea Thompson’s 11 year old brother disappeared in her arms, leaving her to hold only his empty sweatshirt!  No children at all are seen in any scenes after the supposed rapture.  It’s even declared: “All the children are gone!”  That’s just dangerous theology.  It’s a misguided notion of an “age of accountability” that leads some to view childhood as an eternity safety zone, where God gives a free pass.

But in reality, even little children must not presume anything.  They’re not in a safety zone.  They’ve all been born in sin, “estranged from the womb, born speaking lies” (Psalm 58:3).  They need to repent and believe in Jesus.  They must be born again.

5. It did call all to think about the coming Judgment and the need to be saved.  Yes, He is coming back at an hour we least suspect.  And yes, we’ve all got to be ready!

You can read an even more in depth analysis of Left Behind theology here:

“Will Christians be Secretly Raptured?”