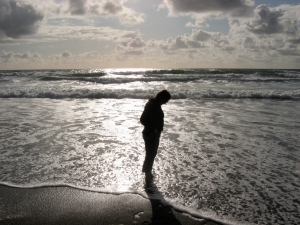 “Loneliness is my least favorite thing about life. The thing that I’m most worried about is just being alone without anybody to care for or someone who will care for me.” Anne Hathaway stated this in a recent interview, but it isn’t a rare statement. I have sat opposite a fair number of young women (and sometimes men), who have expressed this same sentiment. . .  I am not sure what all the contributing factors are, but I do know that this fear is a reality . . .

It may even be more heightened in the lives of young Christian women. For many have been raised to desire, and have rightly embraced, the calling to be a godly wife and mother. As the college years pass and the mid-thirties are looming over the next horizon, discouragement, hopelessness, and even depression can set in as the fear of being single for a lifetime becomes a real possibility. It is no small thing. Every wedding invitation feels like salt to a wound. Friends are beginning to have their second and third child before you have your first. Vacations seem less appealing. Buying your first home isn’t quite as exciting. . .

And even as I want to see them comforted in Christ, so I also want to give them one very clear warning. It is a warning that many young Christians need to hear: Loneliness in a godless marriage can be even more severe than the loneliness one experiences in singleness.

Most singles cannot imagine this being true, but it is. Even as I have sat with multiple young single men and women in counsel regarding their loneliness, so I have sat with multiple individuals who are grieving over the loneliness they are now enduring in their godless marriage. In many cases, these Christians were warned to refrain from marrying the unbeliever they had “fallen in love with.” They were warned as to the dangers, trials, and struggles that they would endure in an unequal union. But they saw singleness as a greater danger, trial, and struggle. And yet, on this side of their marriage vows, they have experienced the reality that loneliness in marriage can even surpass that which they endured as a single.

As a single person, who desires to be married, this may seem like an impossibility to you. However, I want you to think about this: What are all the things that would be affected by being united with someone who does not have the most important thing in common with me? What would it be like to be united in one flesh with someone who does not value what you value, desire what you desire, define good by what you know is good, have the same view of marriage, recreation, eternity, money, church, children, serving, death, life, and the list could go on and on. . . .  As I have sat with grieving Christians, struggling to know how to live in a godless marriage, I hear in their cries the reality that there are few things more lonely than knowing that the person you are the closest to in this life is far from you in almost every way. If you don’t have Christ in common, it is hard to have much in common.

Dear single Christian, there is a loneliness that can surpass the loneliness that even now you are experiencing and achingly want to end. Be patient. Continue to pray to the Bride-Groom you do have. Be wise in selecting the individual that you would willingly give your heart to, and only allow a Christian to place that ring upon your finger. . .