What’s the Symbolism in Moby Dick? 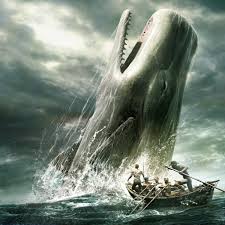 In my travels during our recent vacation to Iowa and back, I listened to the 135 chapters of Moby Dick.  The book is a monster!  What does it mean?

It seems that every time a writer picks up a pen or turns on his word processor to compose a literary work of fiction, deep in his bosom resides the hope that somehow he will create the Great American Novel. Too late. That feat has already been accomplished and is as far out of reach for new novelists as is Joe DiMaggio’s fifty-six-game hitting streak or Pete Rose’s record of cumulative career hits for a rookie baseball player. The Great American Novel was written more than a hundred and fifty years ago by Herman Melville. This novel, the one that has been unsurpassed by any other, is Moby Dick. . .

Its greatness may be seen not in its sometimes cumbersome literary structure or its excursions into technicalia about the nature and function of whales (cetology). No, its greatness is found in its unparalleled theological symbolism. This symbolism is sprinkled abundantly throughout the novel, particularly in the identities of certain individuals who are assigned biblical names. Among the characters are Ahab, Ishmael, and Elijah, and the names Jeroboam and Rachel (“who was seeking her lost children”) are given to two of the ships in the story.

In a personal letter to Nathaniel Hawthorne upon completing this novel, Melville said, “I have written an evil book.” What is it about the book that Melville considered evil? I think the answer to that question lies in the meaning of the central symbolic character of the novel, Moby Dick, the great white whale.

Melville experts and scholars come to different conclusions about the meaning of the great white whale. Many see this brutish animal as evil because it had inflicted great personal damage on Ahab in an earlier encounter. Ahab lost his leg, . . .

I favor this second view. It was the view held by one of my college professors — one of the five leading Melville scholars in the world at the time I studied under him. My senior philosophy research paper in college was titled “The Existential Implications of Melville’s Moby Dick.” In that paper, which I cannot reproduce in this brief article, I tried to set forth the theological structure of the narrative.

I believe that the greatest chapter ever written in the English language is the chapter of Moby Dick titled “The Whiteness of the Whale.” Here we gain an insight into the profound symbolism that Melville employs in his novel. He explores how whiteness is used in history, in religion, and in nature. The terms he uses to describe the appearance of whiteness in these areas include elusive, ghastly, and transcendent horror, as well as sweet, honorable, and pure. All of these are descriptive terms that are symbolized in one way or another by the presence of whiteness. . . .

Who can survive the pursuit of such a being if the pursuit is driven by hostility? Only those who have experienced the sweetness of reconciling grace can look at the overwhelming power, sovereignty, and immutability of a transcendent God and find there peace rather than a drive for vengeance. Read Moby Dick, and then read it again.

I myself, also find in Queequeg the assertion of a Savior figure.

Ponder.  This suspicious and scarred man befriends Ishmael, becoming his body guard, and during the voyage selflessly snatches many from the jaws of death. Queequeg’s coffin, out of which he arose claiming “whether to live or die was a matter of his own sovereign will and pleasure,” was the very means of saving Ishmael in the end.  This makes us think of a certain cross and tomb.

Queequeg’s coffin alternately symbolizes life and death. Queequeg has it built when he is seriously ill, but when he recovers, it becomes a chest to hold his belongings and an emblem of his will to live. He perpetuates the knowledge tattooed on his body by carving it onto the coffin’s lid. The coffin further comes to symbolize life, in a morbid way, when it replaces the Pequod’s life buoy. When the Pequod sinks, the coffin becomes Ishmael’s buoy, saving not only his life but the life of the narrative that he will pass on.

1 Response to What’s the Symbolism in Moby Dick?