What about those Warning Passages in Hebrews? 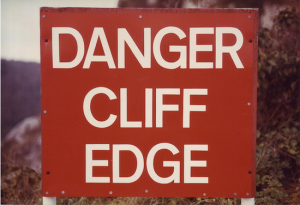 “For in the case of those who have once been enlightened and have tasted of the heavenly gift and have been made partakers of the Holy Spirit, . . . and then have fallen away, it is impossible to renew them again to repentance, . . .” (6:4-6).

Charles Spurgeon argues that the warnings are a means by which believers are preserved until the end.

But,’ says one, ‘You say they cannot fall away.’ What is the use of putting this ‘if’ in, like a bugbear to frighten children, or like a ghost that can have no existence?

My learned friend, ‘Who art thou that repliest against God?’ If God has put it in, he has put it in for wise reasons and for excellent purposes.

Let me show you why.

First, O Christian, it is put in to keep thee from falling away. God preserves his children from falling away; but he keeps them by the use of means; and one of these is, the terrors of the law, showing them what would happen if they were to fall away. There is a deep precipice: what is the best way to keep any one from going down there? Why, to tell him that if he did he would inevitably be dashed to pieces. In some old castle there is a deep cellar, where there is a vast amount of fixed air and gas, which would kill anybody who went down. What does the guide say? ‘If you go down you will never come up alive.’ Who thinks of going down?

The very fact of the guide telling us what the consequences would be, keeps us from it. Our friend puts away from us a cup of arsenic; he does not want us to drink it, but he says, ‘If you drink it, it will kill you.’ Does he suppose for a moment that we should drink it. No; he tells us the consequences, and he is sure we will not do it.

So God says, ‘My child, if you fall over this precipice you will be dashed to pieces.’ What does the child do? He says, ‘Father, keep me; hold thou me up, and I shall be safe.’ It leads the believer to greater dependence on God, to a holy fear and caution, because he knows that if he were to fall away he could not be renewed, and he stands far away from that great gulf, because he know that if he were to fall into it there would be no salvation for him.