Lessons from George Bailey in It’s a Wonderful Life 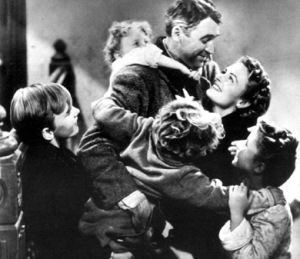 It’s that time of year again. Navigating social dangers at holiday work parties. Fighting extra calories off. Picking out the perfect present for your girl. Of course it is also the season of holiday movies.  From old classics like Rudolph to newer ones like Elf, movies help get us in the holiday spirit, and their endless play on television signals the arrival of the Christmas season. Of course there is no more beloved Christmastime flick than the manly classic, Frank Capra’s It’s a Wonderful Life.

Of course, “manly” is not a word typically associated with the film, especially given the fact that more than one man will find himself teary eyed and avoiding eye contact with his wife at its conclusion. But the film has a good deal to teach us about being a man, the right kind of man. So in the spirit of quality Christmas movies, I offer you a quick guide to manliness, as taught byIt’s a Wonderful Life.

Finally, it is not just the fictional character of George Bailey that provides valuable lessons in manliness; the real life of the film’s star, my personal acting hero, Jimmy Stewart, does as well. Jimmy epitomized the ideals of a gentleman. He took his responsibility to fight in WWII seriously and flew untold missions over Germany in a B-24 (retiring as a Brigadier General from the US Air Force). Known as a kind and soft-spoken guy, Stewart was discrete and chivalrous in his Hollywood relationships and remained humble despite his great success (his only Oscar stood in his father’s hardware store for years). As a philanthropist,  lifelong Boy Scout (Silver Buffalo winner), loving father of 4 (adoptive father too), and a devoted husband for 45 years, Stewart was a man boys could look up to and other men could seek to emulate. President Truman said of him, “If Bess and I had a son, we’d want him to be just like Jimmy Stewart.” His last words were of his wife, “I’m going to be with Gloria now.” You couldn’t ask for a better man example. If you want another example of Stewart working his holiday magic, watch his touching portrayal inMr. Krueger’s Christmas.

Bonus lesson: Oh yeah, and, it’s okay for a grown man to cry.