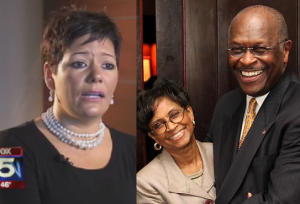 Albert Mohler writes in his blog regarding Herman Cain and the recent allegations of sexual impropriety:

We live in a morally confused age, but there is little confusion about the fact that sexual behavior and personal character are inseparable.

Just a few months ago, Herman Cain was unknown to most Americans. The former CEO of Godfather’s Pizza and former head of the National Restaurant Association caught the attention of the public with his entry into the 2012 race for the Republican presidential nomination. Cain, who was written off by party insiders and political analysts, defied predictions by rising fast in the polls, driven by his personal energy and conservative message. . .

Then came worse. A series of women charged that Cain had been guilty of sexual harassment during his tenure as head of the National Restaurant Association. Though denying any wrongdoing whatsoever, Cain’s campaign had to concede that the National Restaurant Association had reached legal settlements with at least two of the women. Both the campaign and the candidate handled the charges badly, but Cain maintained his viability as a candidate.

Then came yesterday. Speaking to CNN’s Wolf Blitzer, Cain gave the journalist what he called a “heads up” and then revealed that an Atlanta woman would be charging him with a 13-year sexual affair. Cain denied the charges. “I did not have an affair,” he insisted. “I have done nothing wrong.”

The woman, Ginger White, has indeed made the accusation. As she told the Atlanta Fox News affiliate, “It was pretty simple . . . It wasn’t complicated. I was aware that he was married. And I was also aware I was involved in a very inappropriate situation, relationship.”

Now, anyone can make an accusation. Though this public accusation clearly damages the Cain campaign, the allegations are not yet proved. All the charges of sexual misconduct, made by at least three women who have identified themselves in public, add up to a huge problem.

And yet, the greatest damage to the Cain campaign, other than that inflicted by the candidate, was that contributed by Cain’s attorney, Lin Wood, who released a statement yesterday that was undoubtedly intended to help his client. To the contrary, the statement is a disaster.

As the statement continued, it became clear that Mr. Wood did not merely imply such a restriction of concern. He continued by insisting that the current accusation “appears to be an accusation of private, alleged consensual conduct between adults — a subject matter which is not a proper subject of inquiry by the media or the public.”

“No individual, whether a private citizen, a candidate for public office or a public official, should be questioned about his or her private sexual life. The public’s right to know and the media’s right to report has boundaries and most certainly those boundaries end outside of one’s bedroom door.”

Really? That is an argument of desperation, and it will not work. It combines moral nonsense with political stupidity. Voters know better than to accept the claim that the only matters of sexual misconduct of their proper concern relate to sexual harassment or sexual assault. Those charges, by the way, have also not been cleared up by either Cain or his campaign.

It is sheer nonsense to state that no candidate for public office (or public official) “should be questioned about his or her private sexual life.” Reporters did not just ask these questions out of the blue — they came only with public accusations. Once such an accusation is made, it must be answered. In a situation like this, the public’s interest is not lurid, it is moral. Voters know that a candidate’s sexual life is an essential dimension of character. So is the candidate’s fidelity or lack of fidelity in marriage.

Declaring that the right to know and the right to report meet a boundary that ends “outside of one’s bedroom door” is both moral and political insanity. That boundary was exceeded the moment such an accusation was made and it will be so for so long as the charge remains credible.

The salacious intersection where politics and sexuality meet is hardly new. Among U. S. presidents, Franklin D. Roosevelt and John F. Kennedy were both protected from sexual scandals by an adoring press. That pattern holds true no longer. Just ask former President Bill Clinton. Try making Lin Wood’s argument in the midst of Clinton’s own scandals. The argument will not work for Herman Cain, either. Nor should it.

Character does not end at the bedroom door. Any effort to make this claim will be recognized by the public for what it is. We live in a morally confused age, but there is little confusion about the fact that sexual behavior and personal character are inseparable. The question of character is among the most crucial issues of a political campaign. Americans may come to different conclusions about the significance of sexual misconduct in its different forms (as in the case of President Clinton), but they know better than to accept being told that it is none of their business.

We do not yet know if Herman Cain had the affair with which he is charged. We do know, however, that the argument put forth by his attorney is shameful. When charges like these are made, a candidate cannot hide behind the bedroom door.