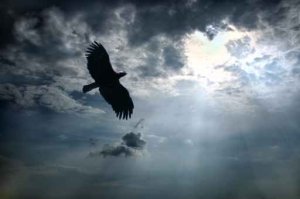 “Who satisfies your years with good things, so that your youth is renewed like the eagle.” (Psalm 103:5)

Though a sparrow may live only two or three years, an eagle’s life may span over five decades.  He attains to a much greater age than most birds.  His aging is seemingly not accompanied by the signs of weakness and decay common to other creatures.  His feathers may age into ugly patches, but they’re soon replaced by his molting a new coat.  His proverbial eagle eyesight remains sharp.  He ever soars as the monarch of the skies.  He epitomizes the Fountain of Youth.

“You see that eagle up on that rocky crag?” says the 50ish year old rancher in Utah.  “He’s been around since I was a little boy.  Many times over last year I thought he was down-for-the-count, weak and low flying, looking crusty and ancient.  But then, he dumbfounded  me.  I saw him soaring a thousand feet up, scanning the earth below with his laser eagle eyes, then lightning bolt like he dove down to the prairie floor snatching up some mouse in mid sprint.  Man, he still looks like a million bucks.  He looks as if he’s been renewed, as if he were young again.”

In Psalm 103:5 David is blessing God for his fresh renewing influences.  Many times, David felt down for the count, like when his men spoke of stoning him at Ziklag (1 Samuel 30:1-6).  But the Lord often renewed David both physically and spiritually, like soon after when he was anointed as King over Judah (2 Samuel 2:4).

The Lord has promised to renew us like the eagle.  Charles Spurgeon wrote: “Every Christian has need that his soul should be restored, should be refreshed, reinvigorated, newly quickened.  As to those who are saved, there is a constant need for restoring them to their first love” (Revelation 2:4).

The truth is that we all must confess to the scourge of personal backslidings.  All too often, we succumb to the strong gravitational pull toward sinfulness.  What Christian hasn’t looked at himself in the mirror and said? “You’ve lost ground spiritually in the past few weeks.”  We all desperately need the Lord to visit us afresh with renewal.

And He does!  We all have stories to tell.  I was down for the count spiritually, having like Peter denied my Master due to some “servant-girl” temptation (Luke 22:54-62).  But He revived my soul again and enabled me to stand against a whole Sanhedrin of opposition and boldly declare, “I must obey God rather than men” (Acts 5:28-29).

Take heart Christian.  He will again renew you like the eagle