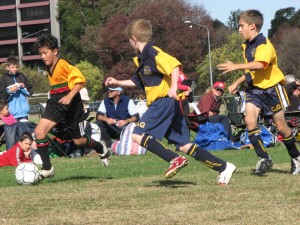 A mother’s tenderness and softness are very important in developing the character of her sons, but it is possible to overdose on a good thing. Proverbs 25:16 Have you found honey? Eat only what you need, Lest you have it in excess and vomit it.

Years ago, there was a dead skunk in the middle of the road in front of our home.  It was stinking to high heaven.  It had to be dealt with.  It was an excellent teachable moment for Nathan, our 8 year old.  He was presented with the challenging dilemma, and informed that he was the man for the hour.  He was to dig a suitably deep hole near the ditch, scoop up and drag the foul carcass about 80 feet to the hole, then cover the grave over with dirt.  He dry heaved a few times during the process, but his mother refused to rescue her “little boy” from such a horrible and “dirty job”.  Don’t be guilty of molly-coddling by taking sides with your son against Dad when a peculiarly difficult chore has been assigned.

Train your sons to face tough obstacles head on, work hard through thorns and thistles, and “find a way” to get jobs done.  They need to become bread-winning providers in a cursed world.  Train them to be tough, not fragile.

A three-year old boy gets bonked in the head by the refrigerator door.  He begins to scream bloody murder.  The wise mother gives him a brief hug, then says, “Show me tough!”  The seven year old boy gets hit smack in the face with a soccer ball during a Saturday game.  Mom doesn’t run out to scoop him up in her arms.  She’s thankful for the principled coach who encourages her weeping son to: “Settle down!” and “Stay out there, because we need you on the field!”  Nancy Wilson writes in Praise Her in the Gates: “Don’t tolerate a cry baby.  Although it is understandable to see tears in young boys, older boys should not normally cry from pan.  This may be an attention-getting device.  Don’t overdo on the comfort.” (Praise Her in the Gates, p. 62)

When a teen son fails a test or loses a neighborhood lawn mowing job, it’s not Mom’s role to go to the teacher or home-owner to plead for mercy or patch things up.  Let him endure the pain of reaping what he’s sown.  No pain, no gain!

— from Womanly Dominion: More than a Gentle and Quiet Spirit by Mark Chanski, (Calvary Press) p. 144